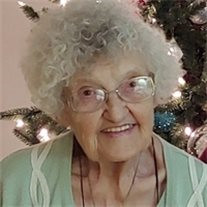 Frances Agnes Shute (nee Sudrla) passed away on March 4, 2022 at the age of 93 at her home in Des Plaines, Illinois. She was born in Brule County, South Dakota to Frank V. and Anna M. Sudrla. She was the third of seven children including older sister and brother, Ann E. and Frank J. and younger siblings Rudy, Emi, Mary Ann, and Helen. She lived in South Dakota on a farm until she graduated from High School at age 17 and moved to Chicago to join her sister Ann. While in Chicago she met the love of her life, Steve, when he crashed a Halloween party she was attending. They were married on August 19, 1950. They spent 34 years together living first in Chicago and then moved to Des Plaines in 1953. While there, they raised their five children, Barbara, David, Judith, Joseph, and Mary Elizabeth. They lost two children before birth including Paul and another unnamed child. She was the best mother in the world. She was a member of St. Stephen Protomartyr Parish since 1953. Frances was a stay at home Mom and returned to the work force when Joe and Mary were in High School, working first at Weiboldt’s Distribution Center and then at MetPath Inc. in their billing department. She made many friends at these jobs and retired at age 70. Her grandchildren Jeff, Adam, Christy, Nicholas, and Lucas and greatgrandchildren Jocelyn, Micah, Isabelle (Izzy), and Madeleine (Maddie) were the light of her life as she was to them. Family was very important to Frances and she enjoyed spending time with her immediate and extended family of her sisters, the “Gabors”, brothers by birth and marriage, as well as her nieces and nephews. She loved to travel and visited 49 of the 50 states as well as at least 11 foreign countries, including her parents birthplace’s in the Czech Republic. Roses were here favorite flower and her husband Steve helped to start her rose garden, which at one point grew to hold over 100 rose bushes. Frances was loved by anyone whose life she touched. She is survived by her children Barbara Hrubec, David, Judy, and Joe Shute and Mary (Dan) Kann, her grandchildren Jeff (Nancy), Adam, Christy, Nicholas, and Lucas, great-grandchildren Jocelyn, Micah, Izzy, and Maddie, her sisters Mary Ann Tomczak and Helen (Paul) Czech. She also is survived by many, many nieces and nephews around the United States, as well as close family in the Czech Republic. She was preceded in death by her parents, brother Frank, sister Ann and husband Peter Prusinski, brother Rudy and wife Arlene Sudrla, sister Emilie and husband Norman Lewan, and brother-in-law Ernie Tomczak, Shute brothers- and sisters-in-law Jim and Marion, Ray and Adeline, and Art and Joan. She will be greatly missed every day.

Frances Agnes Shute (nee Sudrla) passed away on March 4, 2022 at the age of 93 at her home in Des Plaines, Illinois. She was born in Brule County, South Dakota to Frank V. and Anna M. Sudrla. She was the third of seven children including older... View Obituary & Service Information

The family of Frances A. Shute created this Life Tributes page to make it easy to share your memories.

Send flowers to the Shute family.