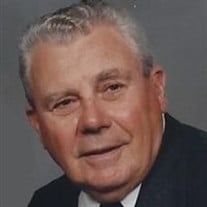 Joseph Anton Ksandr 91, passed away on January 4, with his family by his side.  He was raised in Des Plaines and a resident of Mt Prospect for 57 years.  He leaves behind his loving wife of 58 years, Mary Ann (nee Hacker), 90.  He was the father of Judith (Luke) Yurkovich of Willard, Wi., Janeen (Alan) Wagner of Plainfield, Il., and the late Leonard, Pamela (late Robert) Weber, and JoAnne (Doug) Morris. Step-father of Marcia Taugner of Phoenix, AZ Devoted son of the late Joseph A and Magdelene Grandfather of Aaron, Dawn, Bradley, Kayleigh, Brenden, Madison and Nathaniel. Step grandfather of Michelle (Roger) Bates, Joshua Taugner and Melinda (Ben) Chamberlin.  Great grandfather of Braeden, Kathryn and Kristyn. Dear brother of the late George (late Katherine), Kenneth and William.  Joe was a Veteran of the U.S. Army Air Force, Korean Conflict and a member of St Emily Catholic Parish since 1959.  Member of Knights of Columbus Council # 6481.  Joe was a devoted family man, often working three jobs to support his, yours, mine and ours family!  Joe immensely enjoyed a day out golfing with his brother George, he loved playing cards and enjoyed the challenge of organizing events for the Knights of Columbus, golf group outings and most of all the planning of the neighborhood events such as a corn roast, which is going on it's 50th year.  He planned cocktail parties, card parties, Halloween and a Hawaiian Luau.  It brought him much joy when his twin daughter, JoAnne and her family made their home only seven houses away from his.  He saw his teachings of his hard work implemented into the soul of his daughter Judy who married a Dairy farmer 32 years ago. Joe was so proud of his youngest daughter, Janeen when she graduated from nursing school.  It most often was at the end of each work day; Joe would relax with a Manhattan in his hand.  To sum up Joe's life, as one friend recently wrote, "We lost a great man who always brought cheer to everyone's soul.

Joseph Anton Ksandr 91, passed away on January 4, with his family by his side.  He was raised in Des Plaines and a resident of Mt Prospect for 57 years.  He leaves behind his loving wife of 58 years, Mary Ann (nee Hacker), 90.  He was the... View Obituary & Service Information

The family of Joseph A Ksandr created this Life Tributes page to make it easy to share your memories.

Joseph Anton Ksandr 91, passed away on January 4, with his family...

Send flowers to the Ksandr family.