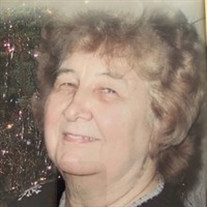 Lorraine T. Johnson (nee Dombrowski), Age 89. Loving mother of Karen (Mohamad) Hammoud, David Johnson, Linda (Pablo) Sevilla and Judy Sullivan.  Former wife of the late John E. Johnson.  Mother-in-law of Matthew Sullivan.  Devoted daughter of the late Joseph and Anna Dombrowski.  Cherished grandmother of Raquel (Casey) Archacki and Natalie Hammoud, Ryan, Jill, Caroline and Christopher Sevilla, Michael, Sarah and Stephanie (fiance of Bradley Weltner) Sullivan.  Dear sister of Raymond(Lynn) Dombrowski, Richard (late Shirley) Dombrowski, Dooley (Sally) Dombrowski and the late Joseph (Mary) Dombrowski, Leonard (Elmie) Dombrowski and Jerome (Lenore) Dombrowski.  Fond aunt of many nieces and nephews.  Lorraine was a Retired Public School teacher of 45 years and a Union Delegate for many years.                                                                             LORRAINE T. JOHNSON                                                                       A TRIBUTE TO OUR MOTHER   Lorraine, our beloved mother, was born in West Allis, Wisconsin in 1930 and raised on a farm in the Upper Peninsula of Michigan with six brothers.  Her two devout parents, Joseph and Anna Dombrowski instilled in their children the Catholic faith, which our mother held dear throughout her life.  Raised with meager means, our mother nonetheless became a graduate of Michigan State University earning a bachelor’s degree in education.  She began her teaching career in Powers, Michigan where she taught for two years.  She married our late father in 1957, and lived in Chicago and Oak Park, Illinois from that point on.  She took seven years off from her career to have four children, but then returned to Pickard School to teach the primary grades.  She taught at Pickard for a total of 45 years, retiring at age 75.    She taught second graders for the majority of her career but she also taught music.  She loved to play the piano!  She was a highly creative teacher who consistently tried to find new ways to teach her students how to read.  Later in her career at age 51 she returned to school to earn a master’s degree in reading from Roosevelt University.  She was a big believer in teaching phonics and eventually was able to have her reading ideas published.   Our mother was a shy young woman when she married but she grew more confident in herself and her profession and eventually became a strong advocate for her fellow teachers when she served as their union delegate for many years.  She had no fear when it came to speaking at Chicago Teacher Union meetings, challenging administrators or marching on a picket line.    Her rural upbringing was a gift because she brought us to the Upper Peninsula to the family farm every summer to be with our grandparents and the rest of our family.   She inherited the family farmhouse and 10 acres of land and it is a gathering spot for our family to this day.  As children we learned to appreciate the beauty of rural living while maintaining our appreciation for being brought up in Chicago.  Her rich Lithuanian and Polish heritage was passed on to us in the form of food, polka music and dancing, and the Lithuanian language that she had learned as a young child (although we never mastered it!)   Our mother’s determination, unwavering faith, and her loving ways will never be forgotten.  She opened her heart and her doors to individuals who needed her help and she wanted all of us to remember that “Jesus was in charge.”  Our mother also had a loving devotion to the Virgin Mary and she was a huge believer in Mary’s apparitions in Medugorje and the messages that followed.  She believed in praying the rosary and continually reminded us of the power of praying the rosary.   It is difficult to say good-bye to our loving mother but the legacy that she left us is one that we will treasure for the rest of our days.  May we always remember her lessons of compassion, forgiveness, and generosity.  Most importantly, may we practice our Catholic faith in the way that she did in both prayer and deed.

The family of Lorraine T Johnson created this Life Tributes page to make it easy to share your memories.

Send flowers to the Johnson family.