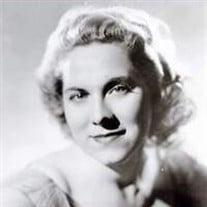 Margaret C. Lukaszewski, Age 95, of the Moorings in Arlington Heights, IL, formerly of Des Plaines, IL.  Ms. Lukaszewski passed away peacefully on September 7th, 2020.  She was born in Milwaukee, WI. to the late Boleslaw and Victoria (Witt) Lukaszewski, Margaret was the dear sister of the late Herbert Andrew (Barbara) Lukas, loving aunt of Linda (Walter) Wilms, Kristine (Timothy) Scoville and Mark (Marge) Lukas, great aunt of Matthew Wilms and Jamie Melissa Wilms. She treasured her dear friendship with the late Mickey, they were like sisters.   Margaret grew up on the south side of Milwaukee, attending Catholic Schools through college.  She earned a B.A. from Mount Mary College.  Further study took her to Chicago and Vienna, Austria.  Margaret traveled with The Theater Men in the early 60's, pleasing audiences in 41 states and Canada.  They traveled in two cars, staying in motels in small cities across the continent.  Margaret was with the Kansas City Lyric Theater for two seasons. She was also a soloist with many symphonies including Indianapolis, NBC and Chicago.  Margaret sang at weddings for many family and friends, adding to the special day of many couples.  C. Cassidy, who wrote for the Chicago Tribune once said that Margaret had "a soprano voice of unusual quality...range, warmth, and creaminess of lyrical line"  Not only did she share her talent through song, but also taught voice to many students, both in her home and at Main North High School.  Her influence and warmth of friendship is still present within the hearts of these students today.  As well as having great musical talent, Margaret was an independent insurance agent for the Rockwood Company for 50 years.  Margaret traveled for pleasure as well as for work.  She traveled to many countries in Europe, the South Pacific, and even did a rafting trip on the Colorado River.  Margaret had a love for all she knew, family and friends.  She will be remembered for her optimistic outlook on life.  Her smile lit up a room and her laugh was infectious.  Margaret never said hello, she sang it!

The family of Margaret C. Lukaszewski created this Life Tributes page to make it easy to share your memories.

Margaret C. Lukaszewski, Age 95, of the Moorings in Arlington...

Send flowers to the Lukaszewski family.