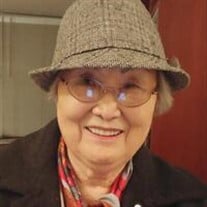 Mary Y Kim age 93 of Chicago, Il.  Loving daughter of Chai Min Kook and Park Soon Im.  Cherished mother of Seong-Ai Kim (daughter), Domingo Seong-Ho Kim (Son), Junho Kim (Son) and Catherine Kim Owens (daughter).  Mary had 9 grandchildren and 6 great grandchildren.  Eulogy for Our Beloved Mom and HalmoniChicago, Jan. 8, 2022We have gathered here in Chicago this afternoon to bid the final farewell to our beloved Mother andGrandmother, better known as Halmoni, Mrs. Mary Kim, or Chai Young-Ai. She is survived with fourchildren, two sons and two daughters; nine grandchildren, and six great-grandchildren in the USA andKorea. We came here to celebrate her full 94 years of joy and loving care, rather than grieve over herpassing. Only regret we share is the gathering limitations imposed on everyone due to the pandemicsituation. This final moment is not shared by every one-of-us in person, but through the digital mediaof zoom format provided by the funeral home. However, this on-line format is making far away familymembers and friends to join this touching moments regardless of long distances separating us fromChicago.Chai Young-Ai was born in 1928 in Yeonan, Hwanghae Province in Korea. It was only 50 miles northof Seoul but now belongs to North Korea, forbidden land from outside since the Korean War of 1950.She was the first daughter among eight siblings from her father Chai Jin-Mook and mother ParkSoon-Im. She spent her childhood in Yeonan but left for Seoul to attend MooHak Girl’s High Schoolwhen she was only 14. This was just a beginning of her long life away from home. After graduationcame the liberation of Korea from Japanese occupation in 1945. She married our father Dr. KimHyun-Kyu who just returned from Hokkaido University in Japan. They settled down in Seoul while Dr.Kim was practicing internal medicine and raised four children. Our father had bigger ambition, anddetermined to cure tuberculosis, which was a major epidemic disease in Korea after the War. In fact,his first daughter Lucia Seong-Ai was the pilot test case when he produced Korean BCG vaccine forthe first time. Then he moved to Denmark and to Wisconsin, USA to pursue his research ontuberculosis. This gave Halmoni a very difficult decision to give up everything in Korea and followedhim to the USA with four young children in 1964. She was only 36.Life in the USA was not easy for her to be settled in Madison, Wisconsin first, then to Saranac Lake inupstate New York, and finally settled in Chicago 50 years ago. She was a living example of a devotedwife and a mother to provide loving care for four children, and later to her grandchildren living in theUSA and Korea. Despite the limited income, she managed to be a very resourceful and artistic personthroughout her life. In addition to her love to raise flowers and plants, she devoted beautifulcalligraphy writings. Recently her grandchildren came to Chicago to bid her farewell then were givenHalmoni’s calligraphy writings in her memory. Highlight of her life maybe the daily exercise groupknown as the “Goldfish Kindergarden” by the Lake Michigan every morning among the group of seniorcitizens nearby. She later became the exercise leader.She enjoyed walking by the Lake Michigan but had rather lonely days after our father passed away.When we became aware of her final days in 2021, her children and grandchildren came to Chicago tobid her farewell and took the best of Halmoni what she could offer. Her two daughters Lucia Seong-Aiand Catherine Jeong-Ai came from Korea and Las Vegas, spending several months with her. Best ofher legacy came out from her early childhood stories in Korea. Lucia recalls her spending threemonths while Mom was still sharp and smiling. This became the best gift she could give to Mom. AlsoJunho and Catherine’s loving care of Mom during the final months became indispensable.Mom, you brought us here together today to say thank you and goodbye. With this in our memory, wepray and say ‘May the Lord bless you, as you rest in peace’ on this 8th day of January, 2022.Yours dearly,Lucia and Byung Koo Kim There are no gallery images. #recaptcha-container label { display: none } Upload a Photo Label: * Image: * Gallery: Obituary Photos Required Confirmation: Upload Gallery Image

The family of Mary Y Kim created this Life Tributes page to make it easy to share your memories.

Send flowers to the Y family.