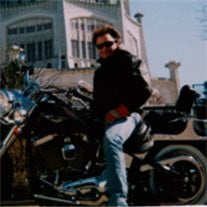 Vince, Vinnie, Vinnie-poo, Vinnie-bob-arino and even Vinnie-Queen, was loved by all who knew him. On Feb 20, 2016, Vince passed away due to complications from a brain stem stroke that he survived on October 19, 2015. Vince just turned 60 years old and spent most of his time residing with his wife and five daughters at their home in Vernon Hills, Il. Vince was at Presence Holy Family Medical Center at the time of his death and was surrounded and supported by all of his immediate family. He received his last rights and blessings before his death. Born in Chicago on Jan 29, 1956 to Nancy Avolio and Lou Longobardi, Vince was the second oldest of five boys, raised in Arlington Heights, Il. Vince was blessed with a half-brother, by Robin Longobardi, Vince's step-mother. Together; Nick,Vince, Mike, Paul, Louie and Tony all learned the joy of cooking from their father and enjoyed some of the best italian cooking. Vince was an avid car and motorcycle lover. He enjoyed a nice ride in the sunshine. Vince met Karen while working as a chef at La Rosa's in Lincolnshire when she became a waitress there. He gave her a ride home one day and never left. He was the only man strong and brave enough to raise three young girls, not his own, and father two more girls with Karen. An awesome Dad to his girls, Melonde, April, Dannielle, Madeline and Ariel were all very close to him each in their own way; a Vince kind of way. He loved his daughter Laura too. Vince found much happiness with his grandkids: Aiden, Evan, Miranda and Adler. Time was spent horseback riding, swimming in the pool and hosting the best 4fth of July and Thanksgiving Day parties. He took a driving job with Skokie Valley Beverage Co and was there for 22 years. He enjoyed riding his motorcycle with friends and enjoyed his nice yard. Vince was super funny and loved and adored by everyone. He is survived by his wife, six daughters, four grandchildren and five brothers. The loved he had for his family will be cherished. His smile and "larger than life" personality will live in our hearts forever. We all look forward to "until we meet again", peace and love Vince. Why do the best people die so soon? When you are in a garden, which flowers do you pick first? The most beautiful ones.

Vince, Vinnie, Vinnie-poo, Vinnie-bob-arino and even Vinnie-Queen, was loved by all who knew him. On Feb 20, 2016, Vince passed away due to complications from a brain stem stroke that he survived on October 19, 2015. Vince just turned 60 years... View Obituary & Service Information